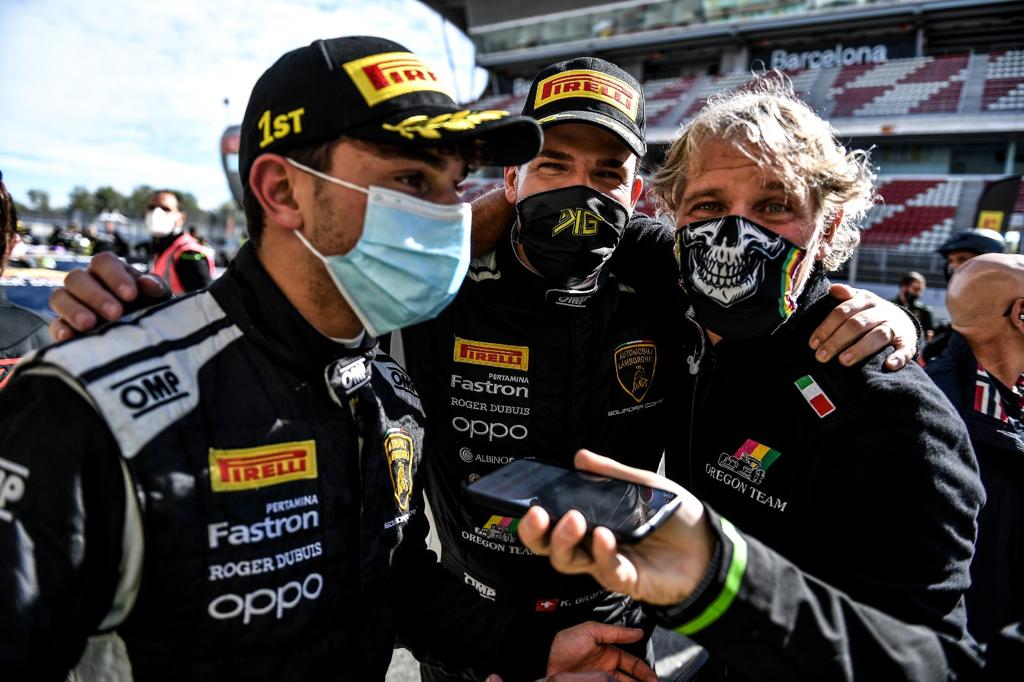 Oregon Team ended a parfect weekend claiming the victory in both races held at the Barcelona circuit, for the third round of the Lamborghini Super Trofeo Europe. After securing their maiden win in Saturday’s race one, Dorian Boccolacci and Kevin Gilardoni doubled on Sunday.

At its very first season in the series, the squad led by Jerry Canevisio and Piergiorgio Testa swept all at Montmeló as Boccolacci and Gilardoni currently take the second place in the Pro class, only one point behind the leader Dean Stoneman.

Yesterday in different conditions, Boccolacci started from the front row of the grid after he set the second quickest time in qualifying one. Frenchman completed an excellent first stint. After the mandatory pit-stop Gilardoni re-joined the field on P2 remaining close to Stoneman. Stewards handed the Briton a 3-second post-race penalty due to a contact between his team-mate Patrick Kujala and Boccolacci. It let Boccolacci and Gilardoni to seize the victory, following the second place they secured in the previous round at the Nürburgring.

In a sunny and dry race two, Gilardoni started well today from the third row moving up to fourth. After the pit-stop Boccolacci took the third position passing the Dane Kevin Rossel. Eventually the French racing driver was promoted to the first position as Stoneman had a drivethrough penalty.

“I am really happy. Despite it is our third race in the Lamborghini Super Trofeo Europe, we showed the team has the right pace”, Piergiorgio Testa commented. “Now we look forward, aiming to maintain a good level as well as to continue with the same, great enthusiasm”.

To complete the Oregon Team super weekend it was also the great effort of Pro-Am pair Victor Franzoni and Lorenzo Bontempelli. The Brazilian racer – who made his Lamborghini Super Trofeo Europe debut – set the fastest time of his class in the Saturday’s qualifying. In race one he and Bontempelli completed two perfect stints to claim the victory. Eventually they finished second in race two as Bontempelli claimed his fourth podium finish over six races and moving up to second in the drivers’ standings.

The next Lamborghini Super Trofeo Europe round will be held on 23/24 October at the Spa-Francorchamps track, in Belgium.

Oregon Team aims at the top spot at Spa with Boccolacci/Gilardoni, Franzoni/Hellmeister
NEXT POST